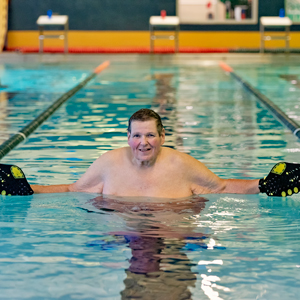 For James Syson, being morbidly obese was a lifelong battle. In 2001, the 63-year-old Niles resident underwent gastric bypass surgery and lost over 200 pounds. However, over the years, the weight slowly began to creep back on. During the winter months, his body was retaining so much water, he was close to 600 pounds.

“I was having a hard time breathing and had to go to the emergency room – I really thought it may be the end for me,” said James.

James Syson before WEBHe spent the next six days in the hospital where his care team removed 140 pounds of water from his body. During this time, he also met bariatric and general surgeon, Michael Schuhknecht, DO, who James credits with helping kick start his journey to a healthier lifestyle. He began meeting with the registered dietitians at the Lakeland Weight Loss Center and learned about changes he could make to his eating habits. He also increased his physical activity and discovered a new found love for swimming.

It wasn’t easy starting out though and the first time James got in the pool he almost drowned trying to make it the short distance across. However, he was stuck with it and with much persistent James was soon swimming five to 10 miles a day. He credits the sport for saving his life.

“It’s important to find something you love to motivate you to make a change, and swimming was that outlet for me,” said James.

Over the course of the next year James lost nearly 300 pounds. Although he was pleased with his progress, he was also left with the unwelcome side effects of extra skin.

“I had over 60 pounds of extra skin and it became quite a burden – it affected my ability to walk and sleep comfortably and was causing me severe back spasms,” said James. “I felt like a prisoner in my own body.” 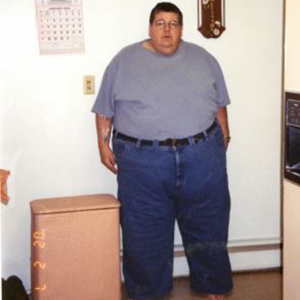 James then turned to plastic and reconstructive surgeon, Ginard Henry, MD. After an initial consultation, Dr. Henry suggested he was a suitable candidate for panniculectomy – a body contouring procedure that surgically removes hanging fat and skin. The procedure would remove a layer of tissue that hung to James’ knees and was almost five feet in length.

When the day of the surgery finally arrived, Dr. Henry wasn’t the only surgeon in the operating room. While James was undergoing the skin removal procedure, Dr. Schuhknecht would also repair two abdominal hernias – a condition in which part of the stomach pushes up through the diaphragm muscle and is common in people who are overweight.

After a successful surgical experience James spent the next four days in the hospital before he was able to return home and continue healing.

“Everyone I encountered at Lakeland was so nice,” said James. “I loved all my doctors and received great care all around.”

Now looking at pictures, James said he hardly recognizes himself anymore and is already more confident about the way he looks and feels. More than ever he is looking forward to the day he can get back in the pool.